History is important for societal and personal growth, and book clubs will find that these selections will challenge not only their perceptions, but also their beliefs. Both fiction and non-fiction, these books are thought provoking and heartbreaking, yet hopeful in some cases. Lively discussion about the horrors of which humanity is capable and how people can survive against all odds are expected when reading these books.

He Was My Chief: The Memoirs of Adolf Hitler's Secretary

The memoir of one of Hitler's personal secretaries gives readers a behind-the-scene glimpse of one of the most evil men to have ever lived. Schroeder is never apologetic, and in a gossipy tone, she talks about Hitler as a person, detailing his personality, his mannerisms, his mood swings, his iron will, his food and conversation preferences, and his relationships with women. Seeing Hitler through the eyes of someone who worked with him, respected him, and challenged him does not alter the common perception of him as a madman but provides a fuller picture of one of history's most notorious mass murderers and is bound to generate discussion.

A novel in letters between writer Juliet Ashton, her friends Sidney and Sophia, and her new friends from the Guernsey Channel Islands. Letters from the remaining residents of Guernsey and their exploits as part of a literary society during the German occupation begin pouring in to help Ashton with her series of articles and spur her muse into action. Lively and real, these character leap off the page.

This book also appears on:

It's All About Culture: Great Books in Foreign Lands

This is a gritty "spy" novel set during World War II beginning in 1939 during the invasion of Poland by the Nazis. The main protagonists Anna and Jan Kopernik are separated by war and face near misses with the wrath of the Germans. This is a fast-paced novel that pushed through the front lines and skulks in the shadows of the resistance, detailing the lives of ordinary citizens who rise up to reclaim their homeland and their dignity in the face of adversity.

Hotel on the Corner of Bitter and Sweet

Jamie Ford's novel is a love story that begins in 1942 when Chinese-American Henry meets Japanese-American Keiko. Love blossoms amid discrimination and is put to the test when Keiko's family is sent to an internment camp. Henry's story moves between the past and his failed relationship with his father and his love for Keiko to the present in which he is a widower on a mission to reclaim the past after the belongings of several Japanese families are found in the basement of Seattle's Panama Hotel. The book touches upon several subjects: war, romance, family conflict, racial tension, and the immigrant experience.

This book also appears on It's All About Culture: Great Books in Foreign Lands

A novel set in Colorado shortly after the bombing of Pearl Harbor and narrated by a young teen who is confused by the world around her, particularly a home town that rounds up the Japanese and places them in an internment camp near her home called Tall Grass. It also touches upon the harm caused by wrong-headed government policies, the fear that leads to prejudice and hatred, and the impact a war can have on everyone.

A slim novel that tells the story of the German bombing of Coventry, England, on Nov. 14, 1940, through the eyes of Harriet, a widow of the Great War, and Maeve, an artist and single mother whose son is a fire watcher. Humphreys brings a sad day in history to life with vivid imagery, making readers feel as though they are in the city with the bombs falling around them. The book shows ordinary people pushed into action during wartime and how horrific events can bring strangers together.

Sarah's Key is a heartbreaking novel that centers on a real but little known incident that occurred in France during World War II. The Vélodrome d'Hiver roundup on July 16, 1942, involved thousands of Jewish families being taken from their homes and housed for days in disgusting, degrading conditions in the Paris stadium before they were taken to the Auschwitz gas chambers. More than 4,000 Jewish children ages 2 to 12 were killed. Tatiana de Rosnay tells the story of the roundup through a fictional little girl who tries to protect her younger brother by locking him in a secret cupboard in their bedroom, believing that she and her parents will return home in a matter of hours. Six decades later, Sarah's story is uncovered by an American journalist living in Paris, who gets wrapped up in her investigation at the same time she is trying to save her marriage. The book shows how well-meaning people can spend their lives trying to cover up wrongdoing, but shining the light on such events can both destroy lives and set people free.

This book also appears on Books That Will Make You Hug Your Kids... Tightly 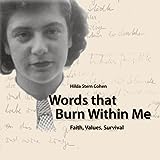 Words that Burn Within Me: Faith, Values, Survival

A collection of photographs, essays, stories, snippets of interviews, and poems detailing Cohen's experiences during the war and the Holocaust as a German resident. Hilda talks about happier times in her village and with her sister, the trials of childhood and being bullied, but soon the reality of politics sets in and her family is forced to leave their ancestral home. Cohen's writing is sparse but detailed in its observations of those around her in the ghetto and the concentration camps. Her keen eye examines the impact of starvation on her fellow neighbors and on her family members, and it also sheds light on how well her family and herself cope with their situation.

This book also appears on Book Club Books: Some of the Best Poetry Books for Your Book Club

Wiesel's recollections of his experiences during the Holocaust are vivid and haunting. His words are heavy with darkness, desolation, and the loss of faith in the midst of evil. It is among the most well-known Holocaust memoirs.

A time travel novel that finds a 12-year-old Jewish girl tired of hearing the same family stories over and over again transported from her home in New York to a Polish village in 1942. She knows the history of the Holocaust and the fate of the Jews, but she cannot convince the Jews of the village to run when they encounter Nazis who tell them that they must relocate. Though targeting middle grade readers, the book gives readers of all ages a detailed description of life in the concentration camps and emphasizes the importance of remembering.

The Holocaust in Fiction for Children

A Large Handful of Novels About World War II

Remembering the Holocaust in Non-Fiction for Kids

Choose from our most popular lists:

Fan Fiction for Adults: The Best in Parallel Literature

A Life Well-Lived: Autism Books, Both Fiction and Fact

Jewish Cookbooks: You Don't Have to Be Jewish to Love the Food

What New Yorkers Read on the Subway

Good Books for Girls in 3rd, 4th or 5th Grade

The Books that Barack Obama Reads and Recommends

Recommending books so good, they'll keep you up past your bedtime.  more...

Serena's poems can be read in issues of Beginnings Magazine, LYNX, Muse Apprentice Guild, The Harrow, Poems Niederngasse, Avocet, and Pedestal Magazine. Her photos can be seen in All Things Girl and through Pearson Education, her book reviews can be found on Savvy Verse & Wit, and her local literary articles can be found on D.C. Literature Examiner.

Anna publishes book reviews on Diary of an Eccentric, and articles about the Baltimore book scene at Baltimore Literature Examiner. She also co-hosts war-related reading challenges on War Through the Generations.

Fractured Novels that Mirror the Uncertainty of Everyday Life

Books to Give as Gifts

Dogs and Other Pets

Favorite Books of the Famous & Accomplished

Submitted by Fans of Flashlight Worthy